The Nguruman Maarifa centre initiated a green energy conservation project on pilot basis as an alternative energy source and approach towards climate change mitigation. Twenty community members were trained on tubular biogas technology which involves recycling animal waste to generate gas for cooking and lighting given that communities in this region rely mainly on firewood and paraffin. By the end of the training three complete biogas digesters had been installed.

Steps involved in setting up the system

1. During the setup for the system, site selection was considered to be one of the important factors that determine the performance of the system. According to Mr. Kamau, an expert in this technology, the site needs to be gentle and not very sloppy and also needs to be close to the kitchen.
2. A V shaped trench measuring 10m long, 0.6m width and 0.3m deep was dug and leveled and some sand or dry manure put to ensure its smooth. Where available, a polythene paper was put in the trench as a cushion.
3. Heavy gauge silage tubing (Digester) measuring 10m by 3.2m was then placed in the trench.
4. Both the inlet and outlets were fixed by tying to the silage tubing extra duty PVC pipes.
5. Fixing the gas outlet was done at one metre from the inlet pipe.
6. Connections from the digester to the kitchen were made using PVC pipes, gate valves, sockets, nipples and flexible tube for connecting to the specially
fabricated biogas burner.
7. Once the system was completely connected, 200 litres of cow dung was mixed with 200litres of water and fed to the system via the inlet pipe.

It took about ten days for the anaerobic reaction to generate enough gas for cooking. 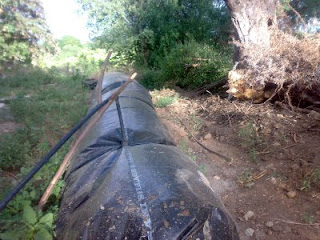 The rise of the silage tube was an indicator that gas was generated.

The community members are impressed by the success of the project. They are now thanking ALIN for the initiative and support they gave them during the training and installation of the same. The three families can now cook their food for shorter period, in a conducive environment free of smoke and at their convenient time.

This is what the community had to say about the impacts of the project:
"I didn't believe that animal waste can be used to produce energy until I saw it working" said one of the elders from the area, Mr. Kamango. 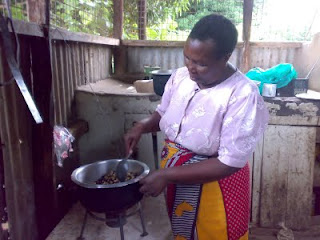 Another beneficiary Mrs. Ndungu had this to say, "I'm grateful for this project. I have been able to prepare my meals in a smoke free environment and in shorter period of time than I used to while using firewood". she is now an ambassador of the technology since people visit her occasionally to proof whether really the technology is working.

Biogas technology is a cost effective investment since all what is needed to ensure continuous gas supply is to feed the biogas digester daily with slurry (mixture of organic material and water, usually at equal proportions). It is also a potential economic enterprise for the trained community members who will be the pioneers of the project and will be able to create employment for a few youths around. 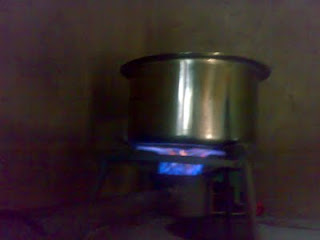 The digestion of organic matter in the biogas plants forms methane commonly reffered to as biogas. This is a combustible gas that burns with a hot blue flame.

Biogas is neither poisonous nor flammable. The residue from the fermentation process in the biogas digester is the main product of the plant. It is a fertilizer of better quality than undigested waste because the nitrogen previously unavailable to crops is transformed into water-soluble ammonia which is readily taken up by plants. by this, the farmers can save their money that would otherwise be spent on purchasing commercial fertilizers.
Posted by Nguruman Maarifa Centre at 12:44 AM

Become an ALIN member by filling in an online form and send it to info@alin.net click here to obtain the form.

Who visited my blog..

Visit our online market data and get a grasp of Nguruman Market prices...